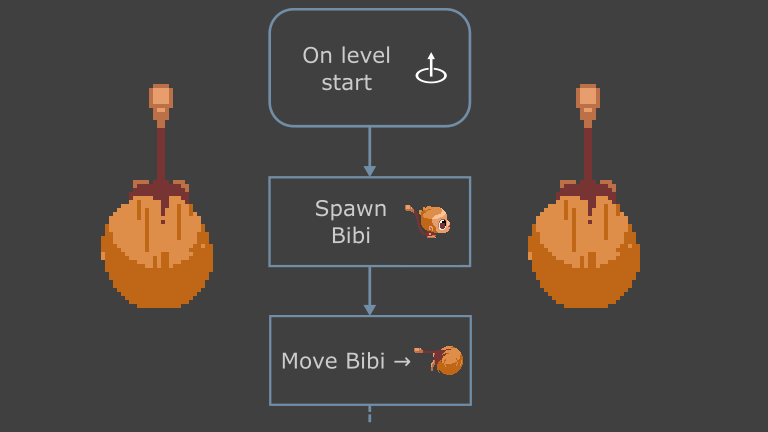 Hi! In Outer Wonders, our slippery-maze-based adventure game, the storyline will be an important part of the game. In order to tell this story, a scripting tool assisting us in creating content such as cutscenes is key. But how are such tools implemented? This week's blog post will tell you more about this!

The point of visual scripting

Let's take the following cutscene as an example.

This cutscene can be illustrated using the following visual script. 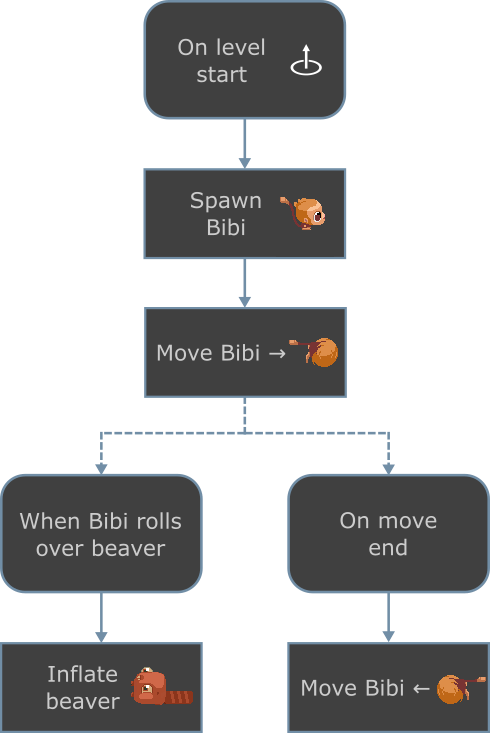 This is what visual scripting is about: setting up scripted events in a easily visualizable way. Actually, we even went further than that.

An even more visual way of scripting

Another way of depicting the previous cutscene would consist in breaking it into 3 steps first:

These steps can be depicted visually using symbols included in the scene, as shown below.

With this setup, the person in charge of designing the cutscene can have a clearer view of the cutscene and where each of its steps takes place.

These symbols, or, rather, these entities as we call them, symbolize actions to be carried out. Entities can be placed inside a level and connected together using our level editor.

The example below shows how we set up the level's spawn to have Bibi start moving to the right at the beginning of the level. 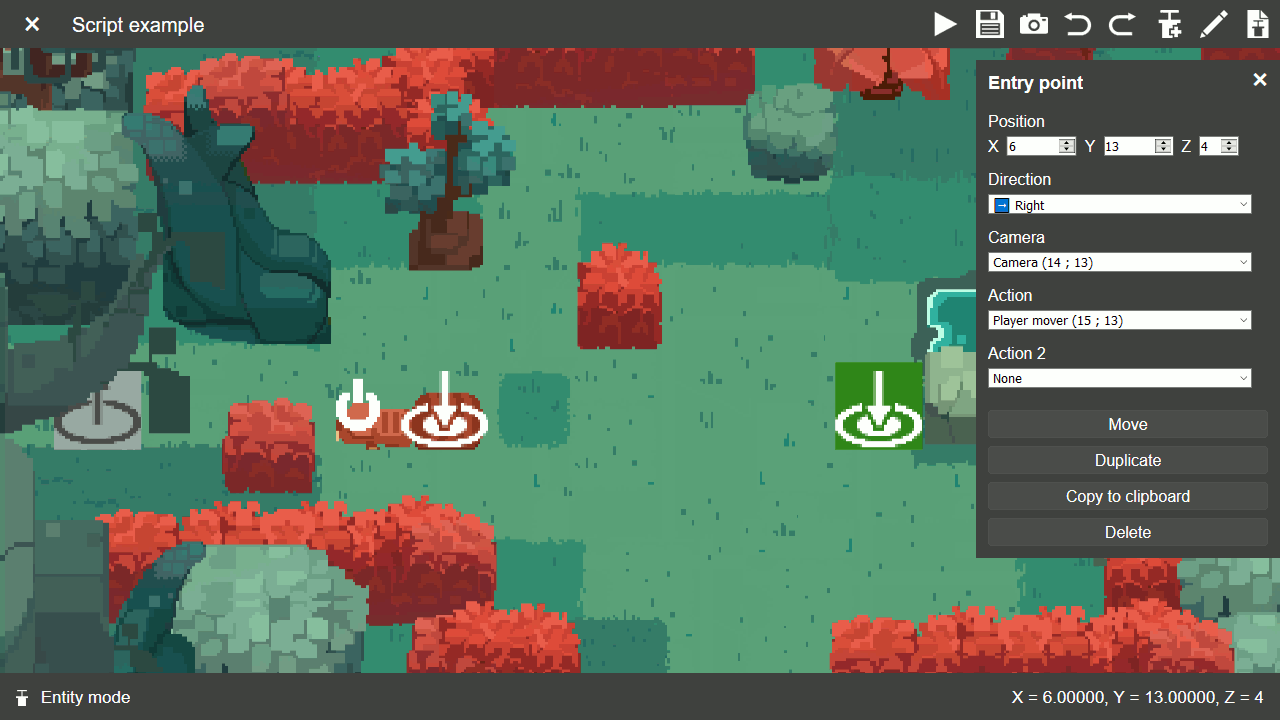 This tool is inspired by early versions of the Serious Editor, which is the level editor that players of the popular Serious Sam games can use to design levels, and has successfully been used by our team to set up game logic, as well as cutscenes.

Setting the actions to be performed using the level editor is one thing, but being able to actually execute them inside the game is another one. Explaining the exact way our script execution backend works would be complex and beyond the scope of this blog post; however, let's get into how its essential components works, albeit in a simplified way, in case you are interested in programming. If you are not, we recommend that you skip this rather lengthy part of the blog post.

First of all, scripts are basically a set of actions to be executed. This means we need to implement the concept of action inside our code.

We could intuitively start by defining an ActionKind enumeration, as follows:

We will have to complete this definition at a later stage. In our example cutscene, some actions have to be performed "simultaneously". For example, when Bibi starts moving to the right, the script does not wait for Bibi's move to come to an end before performing other actions; once Bibi rolls over the beaver, the script will execute an action causing the beaver to become bloated. Yet, at this stage, Bibi is still moving to the right! This concept of "simultaneous" execution is referred to as asynchronous execution.

We can also describe this type of execution as event-driven, which means that some actions will be carried out only once a particular event occurs (even if we cannot predict when it happens). For instance, once Bibi rolls over the beaver, the beaver becomes bloated.

Several things are necessary for a scripting system to expose such features:

In order to achieve this, we can set up a structure which, for each a the level's tiles, will hold the action that rolling over this tile will trigger.

When Bibi reaches a given tile, we can just retrieve the matching action from this structure and execute it.

Actually, we implemented our system in a more flexible way. Once Bibi starts a move, we are capable of computing the exact instant when Bibi reaches the beaver, as well as the exact instant when Bibi's move comes to an end. We set up a queue holding actions to execute, along with their execution timestamp, as illustrated by the timeline below. Once a move begins, actions triggered by rolling over the tiles are added to this queue.

In terms of code, this can be implemented using the following Action and ActionQueue structures depicting respectively an action with an associated timestamp, and a FIFO queue of such actions:

Starting a move triggers a prediction algorithm which adds potential future actions to the queue using the ActionQueue::add_action method. Also, each frame, the engine polls the queue for pending actions to be executed using the ActionQueue::poll_action method. Actions will be returned by the queue and executed only once their execution instant (Action's execution_instant field) has been reached.

There is one problem left to solve. As previously described, our scripts will sometimes include actions to be performed once some specific events occur. However, actions themselves can trigger events as well. In our cutscene example, Bibi's move to the right triggers a differed event (the end of said move), causing another action (move to the left this time) to be executed. This means that sometimes, actions will need to be able to reference other actions! It is therefore tempting to redefine the ActionKind enumeration roughly as follows:

Rust's compiler will not compile such code, though. Generally speaking, Rust will not allow an action to keep a direct reference to another action durably; trying to do so will cause the compiler to fail due to not complying with the rules of the borrow checker, a safety checker inside the Rust compiler that aims to ensure that your application will not access memory in a potentially hazardous way.

This is why, when a level is loaded, all of the triggerable actions are stored inside a pool of actions, and, in order to reference actions in a safer way, we use identifiers (numbers), rather than direct references. Such identifiers can then be used to look up actions inside the pool.

Now, we can create an ActionExecutionContext instance every frame and call its execute_pending_actions method in order to check for pending actions of which execution instants have been reached, and perform these actions. Our script action execution system is now set up and can perform sequences of actions!