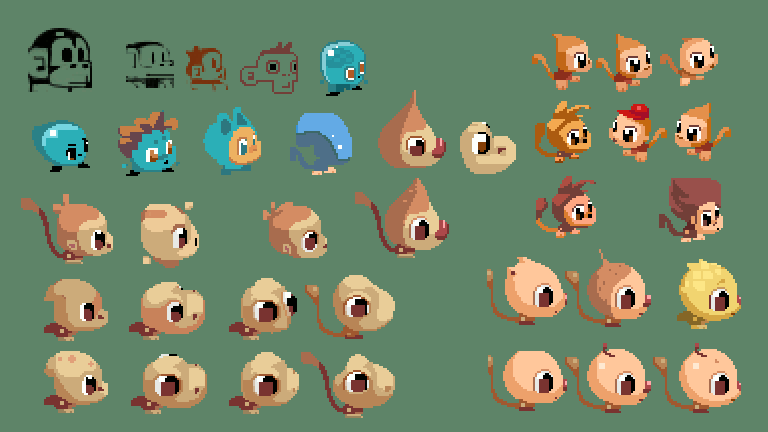 A brief history of Bibi's look

Hiya! Outer Wonders, our slippery-maze-based adventure game, features Bibi, the cute and childish round monkey that you'll find on most screenshots, as the main protagonist. But how did we design Bibi's look? Today's blog post will tell you the story behind this!

Origins: a ball-shaped character that moves around by rolling

As explained in our blog post about the origins of Outer Wonders, we wanted to create a game made up of slippery mazes. In order to achieve this, we had to create a character that would move in a way that reflects the slippery maze gameplay mechanics in a whimsical and funny way.

This is why we decided to design Bibi as a ball-shaped character that moves by rolling so hastily that only obstacles could stop it.

Before we had Batpoussin as the team's main artist, Lyra had already designed many different pixel art looks for Bibi, as described in our blog post on how we turned Outer Wonders into pixel art. 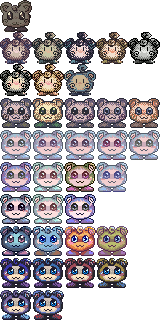 Widening the range of possibilities

Partnering with Batpoussin made a great deal of modernization of our art style possible. We transitioned from the 8-bit style shown above to a pixel art akin to that found in modern indie games.

This required going through many iterations. Actually, Bibi's final appearance was created and approved more than one month and a half after Batpoussin designed his first looks for Bibi.

When they discussed the character of Bibi with Batpoussin, Lyra and Peacebringer already felt that an ape-like appearance would be an interesting evolution from Lyra's first designs, but they also wanted to explore new avenues. Once the discussion was over, Peacebringer and Lyra were overwhelmed with Batpoussin's creativity. One of the looks he designed (shown below) even made us think of the Octocat, the iconic creature used by GitHub as their main logo.

Ape-like looks progressively made their appearance along with the ones presented above.

Upon seeing this, Lyra and Peacebringer figured out that, although these designs looked modern, they could use something more. Something that the previous designs already had. They needed a bouncier shape and an even more visible head for Bibi, so it could roll more easily!

Creativity began to spring from Batpoussin's mind like never before. Batpoussin drew every kind of animal that could have a massive head in a chibi/super deformed fashion: monkeys, birds, crocodiles, pigs, chicks (or chocobo?), you name it. You have to see it to believe it. Which is why we'll display a sample of what he drew below. 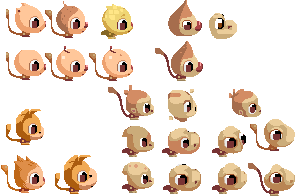 At this point, we were getting closer to Bibi's final design: these new designs matched what Lyra and Peacebringer had envisioned more closely, and the time to select Bibi's final look had come.

Actually, Bibi's final design was achieved by merging 3 of the designs above. The body of one of them, the head of another one, and the color palette of a third one were merged into a single design, as summarized below.

And so Bibi was born!

If you've read our blog post about interactions in Outer Wonders or the January 2021 issue of This month in Outer Wonders, you probably know that Bibi will be able to acquire special powers during puzzles, which will change Bibi's appearance. As an example, here's what Bibi looks like when possessing the power of water.